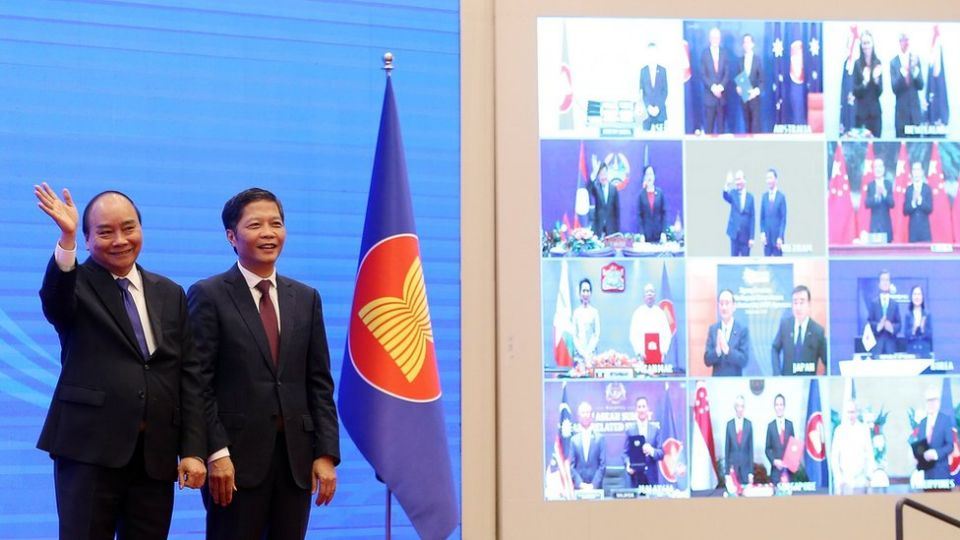 Fifteen countries have formed the world's largest trading bloc, covering nearly a third of the global economy. The Regional Comprehensive Economic Partnership (RCEP) is made up of 10 Southeast Asian countries, as well as South Korea, China, Japan, Australia, and New Zealand. The pact is seen as an extension of China's influence in the region. The deal excludes the US, which withdrew from a rival Asia-Pacific trade pact in 2017. President Donald Trump pulled his country out of the Trans-Pacific Partnership (TPP) shortly after taking office. Negotiations over the new RCEP deal began in 2012 and it was finally signed on Sunday on the sidelines of a meeting of the Association of Southeast Asian Nations (ASEAN).

Why is it important?

The RCEP isn't as comprehensive and doesn't cut tariffs as deeply as the TPP's successor. But many analysts think RCEP's sheer size makes it more significant. "Its membership includes a larger group of nations, notably reflecting the membership of China, which considerably boosts the total Gross Domestic Product (GDP) of RCEP members," according to Rajiv Biswas, Asia Pacific chief economist for analyst firm IHS Markit. While China already has a number of bilateral trade agreements, this is the first time it has signed up for a regional multilateral trade pact.

But what will benefit us who is purchasing school furniture in those countries? Don’t worry, we will bring the answer to you later. But first, let us see why we want this trial?

Why do members want this deal?

For starters, leaders hope that the pact will help to spur recovery from the coronavirus pandemic. "Under the current global circumstances, the fact the RCEP has been signed after eight years of negotiations brings a ray of light and hope amid the clouds," said Chinese Premier Li Keqiang. Longer-term, Mr. Li described the agreement as "a victory of multilateralism and free trade". India was also part of the negotiations, but it pulled out last year over concerns that lower tariffs could hurt local producers. Signatories of the deal said the door remained open for India to join in the future. Members of the RCEP makeup nearly a third of the world's population and account for 29% of global gross domestic product. The new free trade bloc will be bigger than both the US-Mexico-Canada Agreement and the European Union.

What will RCEP do?

The RCEP is expected to eliminate a range of tariffs on imports within 20 years. It also includes provisions on intellectual property, telecommunications, financial services, e-commerce, and professional services. But it's possible the new "rules of origin" - which officially define where a product comes from - will have the biggest impact. Already many member states have free trade agreements (FTA) with each other, but there are limitations. "The existing FTAs can be very complicated to use compared to RCEP," said Deborah Elms from the Asian Trade Centre. Businesses with global supply chains might face tariffs even within an FTA because their products contain components that are made elsewhere. A product made in Indonesia that contains Australian parts, for example, might face tariffs elsewhere in the ASEAN free trade zone.

Under RCEP, parts from any member nation would be treated equally, which might give companies in RCEP countries an incentive to look within the trade region for suppliers. By using all the benefit we talked above, it will drastically decrease the cost from shipping and tariff. And with this RCEP deal land, we can transport the school furniture faster than ever. In that way, you can open it much earlier. After all, education is a tool for the development of one nation.

If you are interested in our products, you can go to our website for more info. Here is our website: https://www.epgz.com/ Or if you already have your own layout or your design. You can just send it to us. We have a professional designer team to help achieve whatever you want. Here is our email address: ceciliazhang@epgz.com

Previous: Collaborative Learning Environment
Next: FURNITURE MADE IN EVERPRETTY FOR SCHOOL